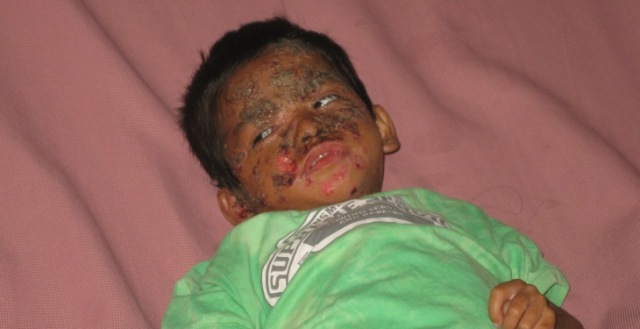 This week we brought Reynel to the hospital to be admitted. Reynel is a seven years old boy and his family is extremely poor. He was suffering from chickenpox, which were infected. He is also severely malnourished. Though Reynel is seven years old he only weighs six kilos.

When Reynel was a baby he had meningitis caused by the tuberculosis he suffered from. His family could not afford medical help and as a result Reynel is handicapped. He is not able to talk, walk or sit. Since he has no proper control of his muscles he often throws up his food. Combined with the fact that there is usually not enough money to buy food this causes the severe malnourishment.

Reynels parents have passed and his oldest sister takes care of him. Together with his sister Sparrow went to the Ministry of Social Affairs to ask them for help. Unfortunately the women we spoke to did not take their job seriously and refused all help. After we strongly insisted on it, they only once gave us a food-parcel of instant noodles and a bottle of multivitamins. They did this so we would no longer bother them, rather than out of concern for Reynel. In the hospital we try to make a plan to make Reynel stronger together with the pediatrician and the dietician. His life could have been completely different if he was not born in poverty. We hope we can give Reynel a worthy life together with you. Will you pray for Reynel and possibly support him financially?