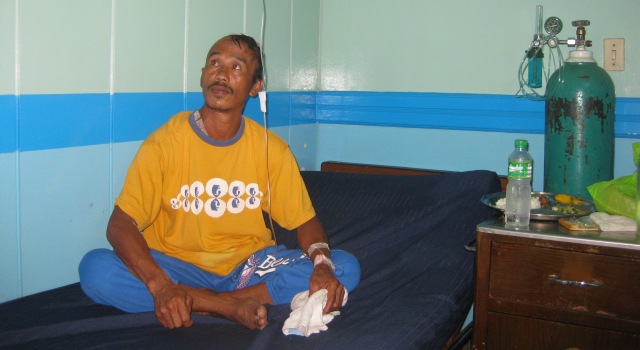 Lazareto, the neighborhood where Sparrow works, is a slum with a lot of problems. Since poverty is often hopeless a lot of people flee into alcohol. Every moment of the day you can see drunken people in the street, which results in other problems like fighting and other violence.

Jaime has become a victim of this violence. His father-in-law was heavily drinking with a group of men. Jaime tried to stop his father-in-law, but he did not want to listen. Jaime went home, where some time later he was stabbed in his head with a knife from behind several times by one of the drunken men. Some hours later his mother-in-law found him. He was lying on the ground unconsciously in a big pool of blood. He was then brought to the hospital in a hurry.

Jaime’s mother-in-law came to Sparrow for help. Sparrow has helped them in several ways. Jaime’s insurance was expired. With the help of a lawyer and the local government we managed to extend his insurance, resulting in much lower medical costs. Sparrow has paid this costs for Jaime. The perpetrator has fled after his attack and is still untraceable.

The costs of the hospitalization and the medication are 250 euro’s.

Stichting Sparrow in Oldekerk, The Netherlands

Sparrow is recognized as an Algemeen Nut Beogende Instelling (ANBI). This means that gifts to Sparrow are tax deductible. For more information about this arrangement visit the website of the belastingdienst.