During a home visit in Lazareto on Friday March 26 we met Diane, a 5-year old girl. The week before she fell off a chair and broke her arm. Their parents cannot afford medical care so the situation got rather worse the next week. Her elbow was swollen and she had a lot of pain. We decided to get her to a doctor.

The doctor made an X-ray, which showed her arm was broken indeed. The doctor hopes he will still be able to cure this fracture by putting her arm in a cast.

Diane’s arm is in a cast now and she received pain medication. Three weeks from now another X-ray will be made to determine if her arm is recovering well. If not a surgery might be necessary.

The costs for the medical treatment and the prescribed medication amount to 100 euro’s. 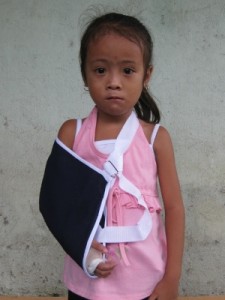